Home to some of the most iconic monuments, attractions and historical sites both in Europe and the world as a whole, Rome is consistently one of the continent’s most popular destinations for its unique blend of culture, history, climate and cuisine.

Though many of the eternal city’s top sights are very much evergreen, making for a fairly dependable trip no matter the time of year, the exact period in which you choose to visit comes with its own unique set of characteristics. Between varying weather, seasonal events and changing tourism rates, each quarter of the year offers something slightly different.

Naturally, there can be no definitive best period to visit Rome, and the benefits of one season easily match up against those of another. As such, we’ve summarized the best of each season to help give you more insight into their individual characteristics, which we hope will help you figure out the best time to visit Rome according to your own preferences. 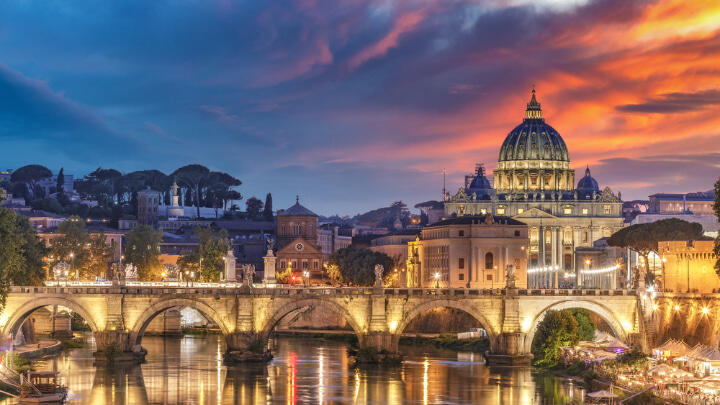 For the most part, winter in Rome typically stands among the quietest periods for the city. In the absence of the glorious summertime weather and the waves of family-oriented holidaymakers, the Italian capital falls into somewhat of a relaxed lull throughout winter.

Though Rome can never truly be considered quiet at any given time, owing to its largely evergreen attractions and lauded reputation for city breaks, this is by far its most serene period of the year. Most attractions and venues, while still somewhat busy, are likely to be much more smooth to visit, without nearly as many crowds as the busier months.

There is, of course, a brief caveat in this trend, namely the holiday season. Proud home to the beating heart of Roman Catholicism, Vatican City, many visitors and devotees alike flock to the eternal city throughout December to revel in its impressive array of cultural and religious events.

Between the city’s comparatively quiet nature and the thrilling bustle of the holiday season, many consider winter to be the best time to visit Rome. By visiting off-season, you’ll also often benefit from some of the lowest airfare and hotel prices of the year, sometimes at quite a hefty discount on peak-season rates.

Things to do in Winter

Should you find yourself in Rome during the holiday season, you’ll find the city awash with delightful installations and festive events. Naturally, the Vatican tends to be the epicenter of it all, adorned with festive displays to complement the famous mass headed by the Pope himself. Throughout Rome itself, you’ll also find a smattering of delightful European Christmas markets, alongside temporary ice rinks at the Auditorium Parco della Musica and the Ice Space Village.

For the rest of winter, you may want to take advantage of the smaller throughput of tourists to enjoy some of the city’s top attractions and landmarks at their quietest. Of course, the likes of the Colosseum and Vatican City will inevitably top the list, but you’ll see some of the greatest differences around the Trevi Fountain and the Spanish Steps, usually packed with visitors and therefore tricky to capture just right.

What’s On in Winter

The winter season in Rome is largely dominated by religious events. Aside from those taking place throughout the holiday season, there’s also the Feast of the Immaculate Conception, an impressive Hanukkah celebration, the parade of the Three Kings for the Epiphany and the oddly animal-oriented Festa di Sant’Antonio Abate.

That being said, the few non-religious events to take place throughout the season also happen to be some of the country’s biggest of the year. New Year’s Eve is celebrated in a big way in Rome, with impressive light shows and street parties taking place throughout the night. In February, the centuries-old Carnevale erupts in a city-wide party held over several days ahead of the traditional coming of Lent. 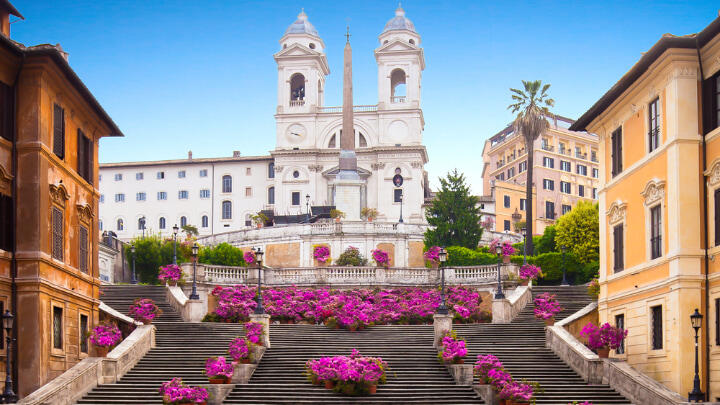 Springtime launches Rome into its early-year shoulder season, with average tourism rates resting somewhere between the quiet of winter and the bustle of summer. For the most part, though you can expect plenty of crowds, most attractions and venues should be smoothly accessible for much of the season. Even better, this period still tends to offer somewhat discounted rates on airfare and hotel prices.

The weather differs quite drastically throughout spring, depending on when exactly you choose to visit. Temperatures tend to flirt between rather cool and very pleasantly warm, getting warmer and more consistent the closer to summer you get. With a relatively good chance of rain throughout the season, you’d be best advised packing an umbrella just in case, as well as some warmer clothing options.

Things to do in Spring

This period is best spent balancing the middling tourist scene in spring with those slightly lesser-visited attractions to get the maximum possible experience. The ruins of Roman Forum and Palatine Hill, for example stand as mere whispers of their former glory, offering some brief but mesmerizing insights into the lifestyles and daily practices of everyday folk in a civilization now long since passed.

For somewhat of a whirlwind tour of Rome’s top attractions and a more convenient means of getting around, a Big Bus Rome tour offers just that and more. The tour operates a central route passing by most of the city’s most popular sights, as well as a hop-on, hop-off service and optional audio-commentary in several major languages.

What’s On in Spring

Embracing the true spirit of spring, Rome puts on a variety of major events and celebrations committed to the themes of rebirth, growth and fertility. Though Easter naturally takes the cake, with an official mass held at the Vatican, there’s also the Festa della Primavera, or Spring Festival, which sees much of the city adorned with blooms of fiery roses and azaleas. Also popular is the Romanesco Artichoke Festival, held in the neighboring coastal town of Ladispoli.

Spring also happens to be littered with holidays and festivities, such as Republic Day, marked by a major military parade through the streets of the capital, and the Birthday of Rome, characterized by another procession led by historical re-enactors dressed in clothing from various historical periods. 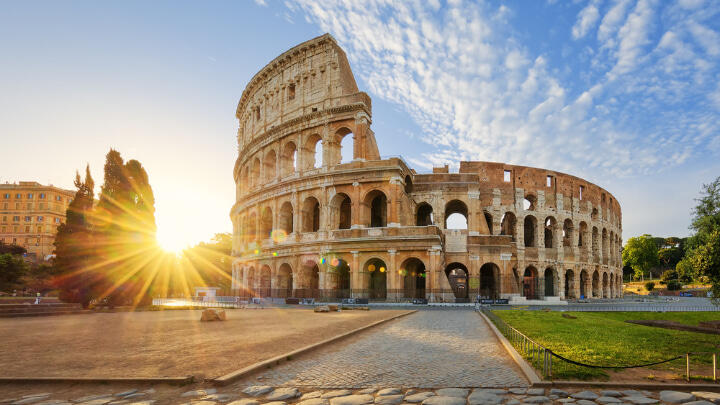 Summer in Rome is easily the most popular and busy period for tourism. Throughout the season, visitors can expect to queue and book sufficiently in advance for their choice of attractions and venues. Given the higher demand, the likes of airfare and accommodation prices also tend to peak around this time.

Though the eternal city has much appeal across the board, one of the defining factors in the summertime rush is its idyllic Mediterranean climate. For most of the season, temperatures remain consistently warm and pleasant, with near-constant sunshine to add to the package. Between the fantastic weather and thrilling bustle of summer, it’s no surprise that the majority of visitors consider this the best time to visit Rome.

Things to do in Summer

As mentioned earlier, many of Rome’s top attractions can get particularly busy around summer. Though that shouldn’t deter you from exploring some of the continent’s most iconic landmarks and historical sites, you’ll want to plan accordingly to avoid any potential disappointment.

Aside from exploring some of the capital’s poster-boy attractions, summertime couldn’t be better for taking some time to enjoy some of Rome’s serene parks and open spaces. Topping the list are the central glades of Villa Borghese, the romantic skyline views atop Pincio Hill and the impressive diversity of international flora houses within the seventeenth-century Botanical Garden.

What’s On in Summer

Rome’s peak tourism season just so happens to coincide with some of its biggest and most hotly anticipated events. Many events, such as the Isola del Cinema film festival, the Rock in Roma music festival and the Lungo il Tevere exhibition space running along the banks of the Tiber stick around for most of summer, meaning you can usually enjoy your pick of the litter no matter when exactly you choose to visit.

Many of these events also turn Rome into even more of a cultural hotspot than usual, such as the Concerti del Tempietto theater series held within the ancient Marcello Theater. Toward the end of the season, the Romaeuropa festival brings together international artists across various disciplines to offer a series of stellar dance, music, theater circus and digital arts performances. 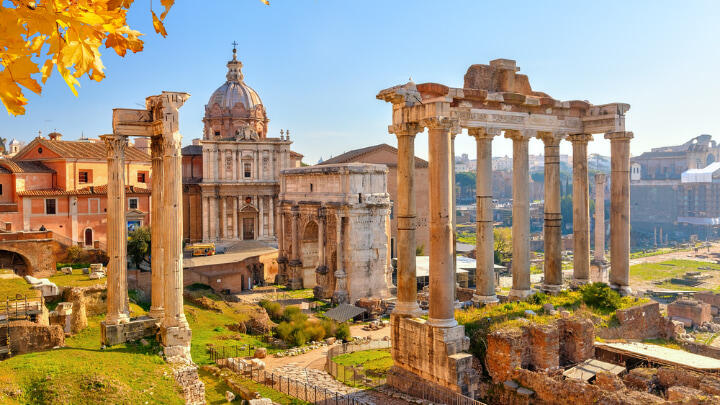 Fall marks the late-year shoulder season for Rome, characterized once again by tourist traffic somewhere between that of summer and winter. In much the same way as throughout spring, you can be fairly sure of comparatively lower rates on airfare and hotel prices.

Much of the fall in Rome offers exactly what you’d expect of the season, with typically cool to mild temperatures dominating much of the month, paired with dwindling daylight hours and sunshine. With at least one day of rainfall likely each week, you’d be best off making sure to pack an umbrella and a waterproof jacket alongside some relatively warm clothing.

Things to do in Fall

As mentioned earlier, the shoulder seasons in Rome are the best times to explore some of the city’s lesser-visited attractions. Unbeknownst to some, the eternal city has its very own Egyptian-style pyramid, the Pyramid of Cestius, alongside the similarly Egyptian-inspired Flaminian Obelisk and Obelisk of Montecitorio located on Piazza del Popolo and Piazza di Monte Citorio, respectively.

With the spooky season falling slap-bang in the middle of fall, you may find yourself looking to get into the spirit of Halloween. Many major tourist venues and restaurants throughout Rome offer their own themed parties, but for some truly authentic macabre chills, the likes of the Rome Catacombs and the Capuchin Crypt certainly aren’t for the faint of heart.

What’s On in Fall

Rome truly becomes the national epicenter of cultural events throughout fall. While also continuing to carry the torch of the Romaeuropa festival, the city also hosts the Rome Art Week to showcase hundreds of international artists across various disciplines, alongside the Rome Film Fest in celebration of all things cinema.

Not to be confused with the Rome Film Fest, the Rome International Film Festival (RIFF) serves as Italy’s first and prime independent, international celebration of film. Showcasing the submissions of aspiring filmmakers, the event comprises a series of showings across the city and across various genres, offering prizes and an international platform for the most impressive pieces.